StrongVPN has been around longer than most. They released their VPN service in 2005 and now have over 950 servers worldwide in 24 countries, which is nothing to sneeze at. Today I’m going through everything StrongVPN review has to do with how well it performs, subscription information, customer support, and the StrongVPN app. Then together, we’ll decide if StrongVPN is the best VPN for your needs. Let’s take a look at it! 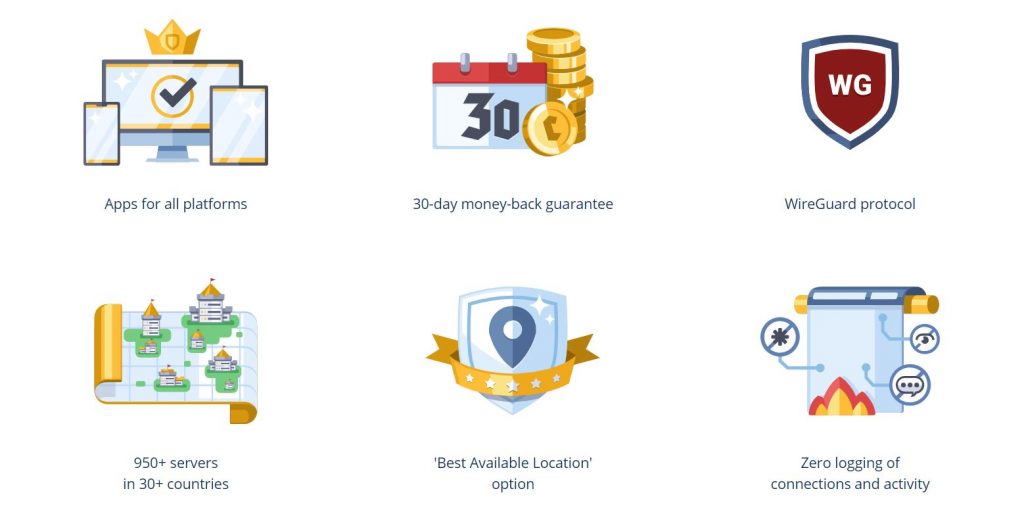 The service offers maximum privacy thanks to the use of military-grade 256-bit encryption. The connection is made via OpenVPN, IKEv2, L2TP and SSTP protocols, and proprietary WireGuard technology. This new protocol was introduced to merge the best features of different protocols into one. It offers higher speeds than OpenVPN, increases performance, requires less computing power than IPSec, is more secure than any other protocol, and is available on Windows, Mac, iOS, and Android clients.

An additional security feature traditionally used by VPN providers is a kill switch, and StrongVPN also has one. When enabled, a ‘kill’ switch jumps in when the VPN connection is lost, effectively blocking your Internet connection so that no data is leaked. StrongVPN calls itself a ‘zero-logging VPN,’ which means that it will never track or store your data and browsing activity while connected to its service. It only collects the information needed to create an account and promises not to sell it to third parties.

Unfortunately, this is as detailed as we get in the Privacy Policy, and there is no external confirmation of these no-logging claims. As other VPN providers are starting to open their doors to independent auditors, it would be good if StrongVPN would do the same.

This would mean a lot to people concerned about the physical location of StrongVPN’s headquarters – the United States, a country whose government is anything but known for keeping its nose out of people’s online activities.

The StrongVPN website claims to be the ‘Best Streaming VPN’ and proposes to support services such as Netflix, Hulu, ABC, HBO, and Sky Go all. BBC iPlayer was not on the list, and testing suggested why: we couldn’t view it from one of StrongVPN’s servers in the UK. Viewing US-only YouTube content is so easy that almost any VPN in the world can do it, but we tried it anyway, and certainly enough, StrongVPN passed the test.

Netflix is, of course, the accurate measurement of VPN unblocking, but StrongVPN also succeeded, allowing us to stream content from Netflix US and Japan (however, Canada, France, and the UK were all blocked). The good news continued until the end of our unblocking tests, where StrongVPN allowed us to stream Disney+ content and watch US Amazon Prime Video while connected to StrongVPN’s servers in the US.

Our performance tests have started positively, with our nearest UK servers averaging 140-160Mbps when connected from a local data center. We also monitored OpenVPN speeds from a U.S. location using a high-speed 600Mbps test line, but the results were relatively disappointing, with speeds of around half to around 60-80Mbps. 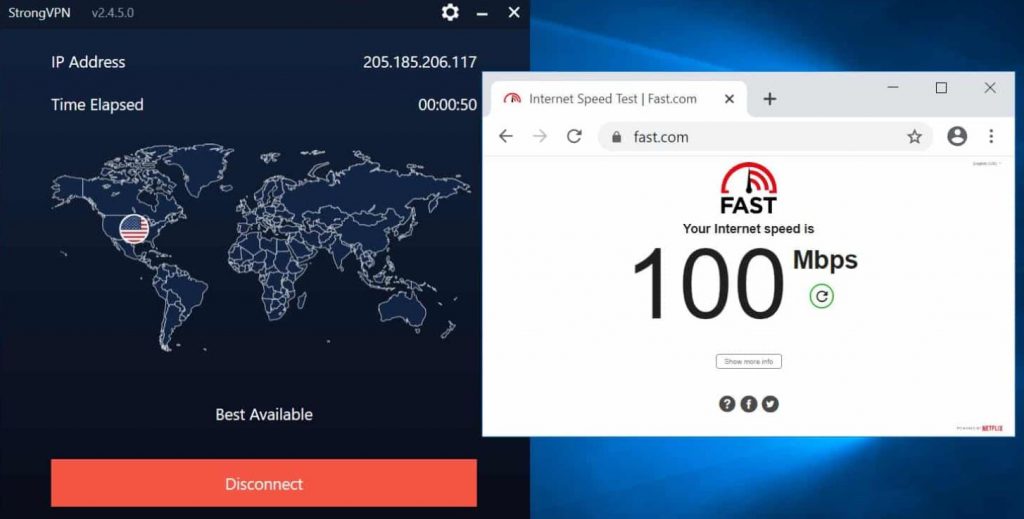 We’ve seen extraordinary U.S. speed results from StrongVPN before. For example, average speeds ranged from 40-45Mbps to 210-220Mbps in our last review and from a terrible 5Mbps to 130-215Mbps in the previous tests. We have yet to determine a cause, but occasionally overloaded servers are high on our list of likely candidates.

StrongVPN’s decent UK performance, however, showed that the service is worth delivering speeds, and these initial results were just the beginning. When we switched to the WireGuard protocol, StrongVPN’s UK performance increased to 190-330Mbps. That’s close to the speeds we saw at NordVPN‘s NordLynx (although at 340-350Mbps, it was significantly more consistent).

So StrongVPN can achieve spectacular speeds, but you can see very different results depending on who you are and how and when you use the service. Keep this in mind when you sign up, and run your speed tests with different locations at different times of the day to see how it works for you.

If you have technical problems, StrongVPN’s support site has several tutorials and troubleshooting guides. The content has been somewhat updated since our last review, but it is still quite limited, poorly organized, and can’t start competing with the competition’s best. Still, there is some useful information here, and we found live chat got us fast and helpful support when we needed it.

The provider offers only two subscription formulas – monthly and yearly. The 1-month option is priced at $10.00, while the annual option costs $5.83 per month ($69.99 billed annually). Both plans are offered with a 30-day money-back guarantee with an exciting perk – you don’t even have to have a legitimate reason to get your money back.

The website claims you can get the service for as low as $4.37 per month for the annual plan and $7.50 for the monthly plan. This is true when you click the Save Now button on the homepage. A coupon is applied automatically and only counts for the first billing cycle. At the end of the promotion, the above rates will apply. 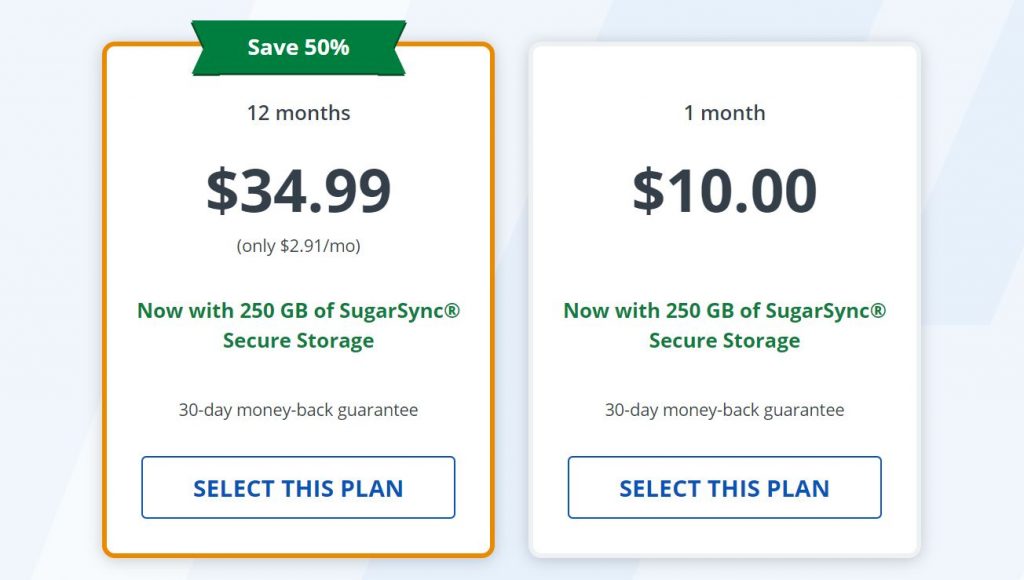 As the company indicates, the money-back guarantee is risk-free and can be seen as a free trial period as it does not exist. The only catch is that you still have to sign up for a subscription and have money deducted from your account.

If you experience problems with the installation and use of the service, please refer to the article library on the help site. They are divided into groups according to the area covered, including installation guides, technical support, billing support, FAQ, and about the section. The support site is searchable by keyword. StrongVPN also has a blog, which is easy to read for anyone interested in both the company and the VPN industry in general.

For all your concerns that cannot be answered by the support site, the company’s expert customer service agents are there for you, 24/7. You can reach them via live chat or make a detailed request on the website and get an answer via email in less than an hour. A welcome addition to these common practices is the telephone line that allows you to contact them at any time during the company’s business hours – between 9 a.m. and 5 p.m. CT (UTC -6), Monday through Friday.

While more pricing options would be much appreciated and the fact that the provider is based in the US does cause some concern, StrongVPN is a generally well-rounded VPN service that opens many options for its users – streaming geographically restricted content and tampering with many devices, while at the same time offering excellent speeds. The telephone support provides even more opportunities to connect with the company and get help quickly.

StrongVPN is not a top-notch VPN, but WireGuard support and the ability to connect up to 12 devices simultaneously will appeal to many, and 250GB of SugarSync cloud storage is a seriously valuable extra.