TorGuard VPN review: The name may look very familiar, but TorGuard has nothing to do with the Tor Project despite sharing the same privacy angle. Instead, it is a company that offers a range of products, including an anonymous VPN plan for protecting your privacy while using torrents (that’s where the “Tor” comes from). Specifications are good, with over 3,000 servers in 68 locations in 55 countries, OpenVPN/OpenConnect/WireGuard protocol support with multiple stealth options to prevent VPN blocking (OpenVPN Embezzlement, Stunnel, OpenConnect, and Shadowsocks), custom apps for Windows, Android, Mac, and iOS, and installation instructions for Linux, routers and more.

Now that we’ve got that out of the way, I can start by asking if it’s a good VPN or not. Is TorGuard worth using? Let’s find out in our TorGuard VPN review.

Most VPN providers use their privacy policies to explain in detail any logging issues. Still, TorGuard’s privacy page is limited to a single sentence on the subject: TorGuard does not collect or log data from its Virtual Private Network (VPN) or Proxy services. This is about as easy as any privacy policy can get, but at least it’s easy to read. But is it true? We have no idea. And since TorGuard hasn’t let itself go through any public scrutiny, we have to trust the company to tell it like it is.

There are undoubtedly many technical possibilities to improve your privacy, at least for old acquaintances who can figure out how to use it. Multiple stealth and blackout technologies are designed to connect you, even in countries that detect and block ordinary VPNs. You can manage your encryption algorithm, port, and authentication method manually (AES-256, various CBC, and GCM algorithms, SHA1, SHA256, SHA512.) Built-in blocking of WebRTC and IPv6 leaks prevents you from giving away clues about your identity, and a kill switch blocks Internet access if the VPN fails.

There are plenty of other options that can help if you are willing to spend time setting it up. For instance, the Windows client can automatically start a program when the VPN connects and close it when it disconnects so that everything it does online is always secure.

The key here is probably the knowledge and experience of the user. If you understand everything TorGuard offers, you can configure the program to provide excellent privacy and security. However, the service won’t help you much, so newcomers to the network can get better results with much simpler apps with few settings they might understand (global kill switch, DNS leak protection, auto-connect when accessing insecure networks).

Our in-depth TorGuard test started with a look at the Windows client kill switch. Or, at least, that was the idea. It turned out to be more complicated than we expected.

For example, there is no “kill switch” setting at all. The first one we saw was an arm kill switch after the first successful connection – was that what we needed? We turned it on, ran some tests, and no – our internet connection wasn’t blocked when the connection went down. That leaves the possibility of a user checking the first ‘kill switch’ box he sees and thinks he is protected if he isn’t, which in itself is a problem.

Go to the Network tab, and there is now a ‘Kill Switch’ checkbox as part of a ‘Seamless reconnect’ function. This is simpler than a previous build, where we had to specify the network interfaces that should block the ‘kill switch,’ but it is still a bad design to put two ‘kill switch’ settings in separate tabs.

We enabled this kill switch anyway and found that it worked well with both OpenConnect and OpenVPN connections. However, we shut them down, our internet access was blocked immediately, the client showed a warning within a second or two, and our traffic remained secure at all times.

Oddly enough, the client did not attempt to reconnect after the VPN was lost, and we saw no way to do that. If there is a problem with TorGuard’s client, that’s an excellent example; the developer has worked hard to include low-level technical settings that most users won’t begin to understand (‘disable the interface’s default route’) while ignoring many more standard features they are likely to need (‘automatically reconnect if the connection fails’).

Whatever we think of TorGuard’s design decisions, the client scored in the most critical areas by protecting our privacy and alerting us to the disconnection. It was easy to reconnect – switch to the client, click Connect – and we were generally back online within seconds.

The TorGuard website confidently claims that it allows you to ‘connect to any location in the world and experience content without any restrictions.’ Is that the reality or the marketing movement? Let’s take a look… YouTube is probably the easiest service to access, so we weren’t surprised to see that TorGuard allows streaming US-only YouTube content. 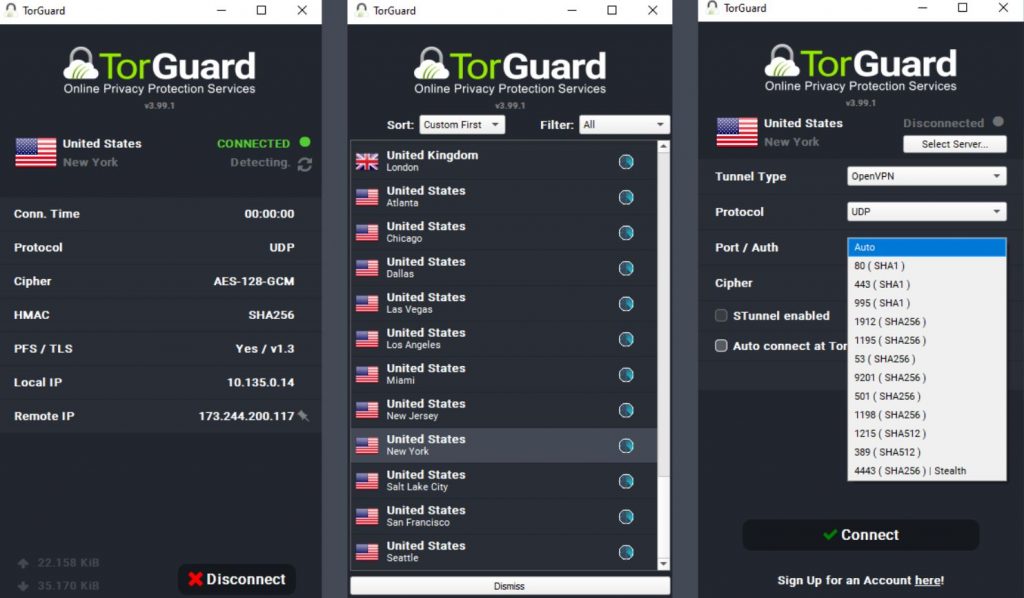 BBC iPlayer is always more of a challenge, and certainly enough, the VPN detection has blocked all our viewing attempts. Experience content without ‘any’ restrictions? I don’t think so. US Amazon Prime Video also blocked us. And we had no success with Disney+ or US Netflix.

If unblocking websites is a priority, buying one of TorGuard’s special residential IPs should solve the problem, hopefully forever (no one else will use the IP, so it’s unlikely to be spotted). It is an effective solution, but also an expensive one for an additional $7.99 per month. NordVPN has unblocked all of our test streaming platforms with its standard products, and they are priced from $3.71 per month in the two-year place.

We measured the performance of the TorGuard from both a UK data center and an American home with a 600Mbps test connection. Connecting to our nearest server in the UK gave us download speeds of a solid 125-150Mbps, putting us approximately in the middle of the performance range. (Some VPNs fail to make 100Mbps, but most are somewhere around 100-200Mbps, and top candidates, including NordVPN and Hotspot Shield, beat 300Mbps).

TorGuard’s results in the U.S. significantly improved over our last assessment, ranging from 160Mbps at peak times to 250Mbps at best. We conducted our main tests using OpenVPN connections. We also tried to use the fast WireGuard in our UK testing environment, but the client failed to connect. It’s not clear why, but if you have more luck with WireGuard, you may see even better performance than we do.

Prices are reasonable at $9.99 per month, $6.66 on his quarterly plan, or $5 per month on both his 6-month and annual plans. That’s not bad, but there is room to save a lot of money elsewhere. For example, sign up for a year with TorGuard, and you pay $59.99 in advance; sign up for two years with Surfshark, and you’ll be asked for $59.66 for the first term, while Ivacy’s five-year plan is only $69.99 at the moment.

TorGuard excels at add-ons, with options such as streaming and residential IPs for multiple U.S. countries and states, allowing you to potentially unblock something in your destination country for an additional $7.99 per month. NordVPN offers static IPs for $70 per year ($5.83 per month), while Ivacy charges a minimum of $1.99 per month.

Access to TorGuard’s 10Gbit ‘Premium Network’ is also available for an additional $7.99 per month. The company says this is ‘designed to … faster and more consistent speed’ in the UK, US, and Canada, but warns that ‘whether or not it can offer better speeds than our regular network and is highly dependent on customer set-up.’ TorGuard has a sort-of 7-day trial, but it’s not quite like everything we’ve seen.

Customer service is a strong point for TorGuard. There are three main channels to get in touch with customer service: 24/7 live chat, email tickets, and a toll-free phone number (only available in the US). We had a pleasant experience with the 24/7 live chat support. Within five minutes of reaching a question, a representative responded to us. The expert support team thoroughly answered our questions. The live chat is undoubtedly the best way to get an answer, but for in-depth technical questions, you may be asked to open a ticket instead so you can add more details and screenshots, if applicable.

TorGuard has several great strengths. The VPN is privacy-friendly, and its security features give you a ton of freedom to customize your experience. TorGuard can bypass harsh censorship, even in China, and also offers excellent torrenting support. The main drawback is that you will need to buy a special IP address for an additional monthly fee to stream Netflix. Other premium VPNs give you access to streaming sites at no extra cost in our best Netflix VPNs guide.

On the other hand, we weren’t impressed by TorGuard’s speeds, despite the large server network, and the interface leaves a lot to be desired. We would also like to see better streaming support in the necessary VPN service rather than a pricey add-on feature.

TorGuard is highly configurable and has some uniquely powerful options, but it's not built for ease of use, and you'll have to be an expert to really benefit from the service.

7 of Biggest Mac Annoyances & Fix Them