Norton Secure VPN review: Norton, also known as NortonLifeLock after a merger in 2019, formerly known as Symantec (yes, we understand that’s a lot), is one of the most prominent computer security names. With a comprehensive suite of cybersecurity services, including antivirus software, identity theft protection, privacy protection, and more, Norton is well known in the digital security industry, with a footprint spanning the globe and millions of customers.

In this Norton Secure VPN review, we’ll look at one facet of their offering, the Norton Secure VPN, a no-frills but competitively priced addition to the VPN market, and see if it’s worth your investment.

The secure VPN website claims that the service offers a “virtual private network without a log that does not track or store your activity.” This is a good start, although there are no details on the front page.

A ‘What is a no-log VPN’ support article vaguely states that the service ‘collects subscriber information for communication purposes, data from mobile devices and aggregated bandwidth usage,’ although it ‘records no information about where you are going on the Internet.’

The article reminds us of its privacy policy to find out more, but this was outdated and led us bizarrely to Broadcom’s website. Not so professional.

The actual Norton Secure VPN privacy policy says that the service collects or accesses your IP address or location (anonymized); device name, type, OS version (for mobile devices) and ID serial number; a running total of bandwidth used, and some basic diagnostic information to resolve any problems (an error code, for example).

There are no big surprises here. Locations are collected or accessed but not linked to your account, apparently to help the Secure VPN app choose the nearest server for you. And while the service may collect enough data to identify a particular device, if it does not link that device to a session (connection dates and times, incoming and outgoing IPs, etc.), that information cannot compromise your privacy.

While all of this is good news, Norton Secure VPN has not subjected itself to a security audit, unlike some competitors. While we have no reason to doubt the company, a public audit of the systems would reassure potential customers.

Norton Secure VPN scored very mixed results in our performance in the UK. A peak median speed of 66.2Mbps on a 75Mbs connection wasn’t bad at all, but the service was very inconsistent, and other test sessions averaged 38-59Mbps.

Testing the VPN speed is a tricky business, so we crossed our figures by running a second check at a U.S. location with a 600Mbps test line. Daytime speeds were marginally better than in the UK at 50-85Mbps, but with a drastic deceleration in the evening, the speed dropped to 10-15Mbps. 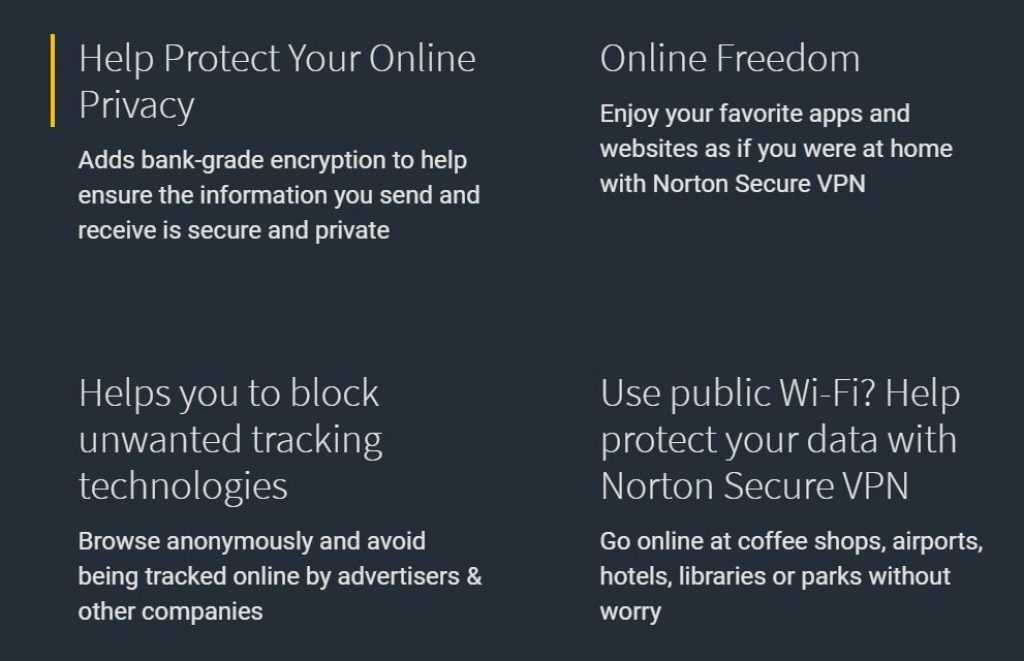 We conducted our tests during the coronavirus lockdown of April and May 2020, when internet and VPN traffic was well above average, and it is possible that this affected our results. However, this cannot be a complete explanation, as other VPNs, we tested in recent weeks routinely hit 100Mbps, 200Mbps, and more, and the current speed champion, Hotspot Shield, averaged 490-575Mbps. Now that’s fast.

Norton Secure VPN is usually sold on the ability to protect your data from cybercriminals when you use wifi, and the website does not make any big claims (or even small claims) about unblocking big-name streaming platforms.

Often this means that the VPN cannot unblock much and that the secured VPN got off to a bad start when it failed to get us into BBC iPlayer. There was also no success with Disney+ – we didn’t get a geolocation error, but the site refused to load, a problem we’ve seen with many VPNs. However, Norton Secure VPN wasn’t ready yet, and it immediately unblocked US Netflix and Amazon Prime Video for us, no problem at all.

That’s not a progressive unblocking performance, but it’s better than we expected and a better result than we’ve seen with many competitors.

Norton Secure VPN is available as a stand-alone product. Still, it also comes with some editions of the Norton 360 security suite, and its pricing structure makes it clear that that’s what NortonLifeLock wants you to buy.

For example, the monthly VPN plan is reasonably priced at $7.99, and the annual plan looks cheap for an equivalent of $3.33 a month. At least, until you realize that is only because you have a 50% introductory discount, and the price rises to a steep $6.66 on the renewal. To put that into perspective, Norton Secure VPN asks you to pay $40 for the first year of service, $80 every year after that; pay the much more powerful Surfshark just $47.76, and you get instant two-year coverage. 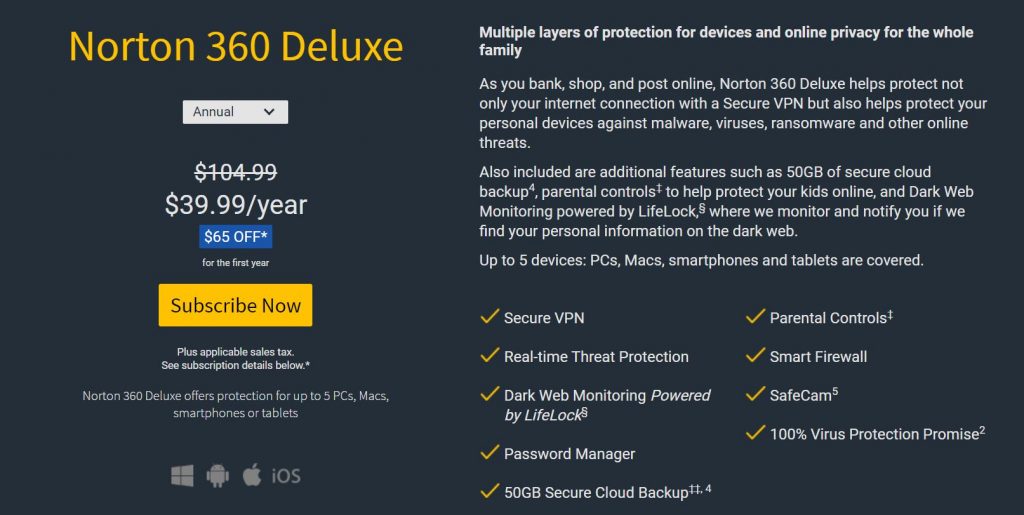 But wait, there’s another way. Buy Norton Secure VPN as a bundle with Norton 360 Deluxe, and you get antivirus for up to 5 PCs, Macs, cell phones, and tablets; a firewall for PC and Mac; parental controls, a password manager, 50GB of cloud backup space and more. But it’s only marginally more expensive than the stand-alone VPN for $50 (equivalent to $4.17 per month) for year one, $100 at renewal.

A free trial is available if you sign up on a mobile device. Even if you decide to purchase, you are protected by an unusually generous 60-day money-back guarantee. Well, that’s the idea, anyway – the exact rules vary depending on where and how you buy the product. The best advice here is to read the fine print carefully.

If you are experiencing problems with Norton Secure VPN, you can visit the support site, but we recommend keeping your expectations low. There are a small number of FAQs, usually very brief, and if you have a VPN experience, we suspect you could produce better content in an afternoon. Chances are you’ll contact the support team directly, especially since Norton makes it so easy, with 24/7 live chat and phone options.

As a stand-alone VPN, Norton Secure has little more to offer than the basic protection of privacy. But the truth is that this VPN is not necessarily meant to be a stand-alone service. Norton Secure makes much more sense if you see it as an add-on for a more robust antivirus system. We got basic security with minimal maintenance, and there was little customization or advanced features that required our attention.

But in addition to this basic protection, we found some gaps in the service, such as the lack of a “kill switch,” some problematic privacy issues when logging our anonymized IP address, and problems with streaming services BitTorrent support.

Norton Secure VPN may work as a simple addition to Norton 360 security equipment, but it doesn't have the power or performance to compete with the top of the VPN competition.