Compared to its brothers, the Asus ROG Strix G15 does its job well when it comes to delivering at lower prices. For $999, you get the reliable performance and a snappy keyboard wrapped up in a sleek, punk design, but a bleak 15.6-inch display, below-average battery life, and hollow speakers keep this laptop away. While it doesn’t match some of the best cheap gaming laptops around, the Strix G15 is excellent when you need something reliable. This is our Asus ROG Strix G15 Review.

Asus hits an electro-punk theme on the Strix G15 with a pink ROG logo over a faux-aluminum hood and a pink rim around the lid. There is a thin recess on the lid, making the deck and the LED indicators visible. Beyond the lid is a thick cartridge at the back that provides space for several ports, but makes the laptop a bit bulky. When I opened the lid, the light bar around the lip of the deck flickered out with RGB lighting. 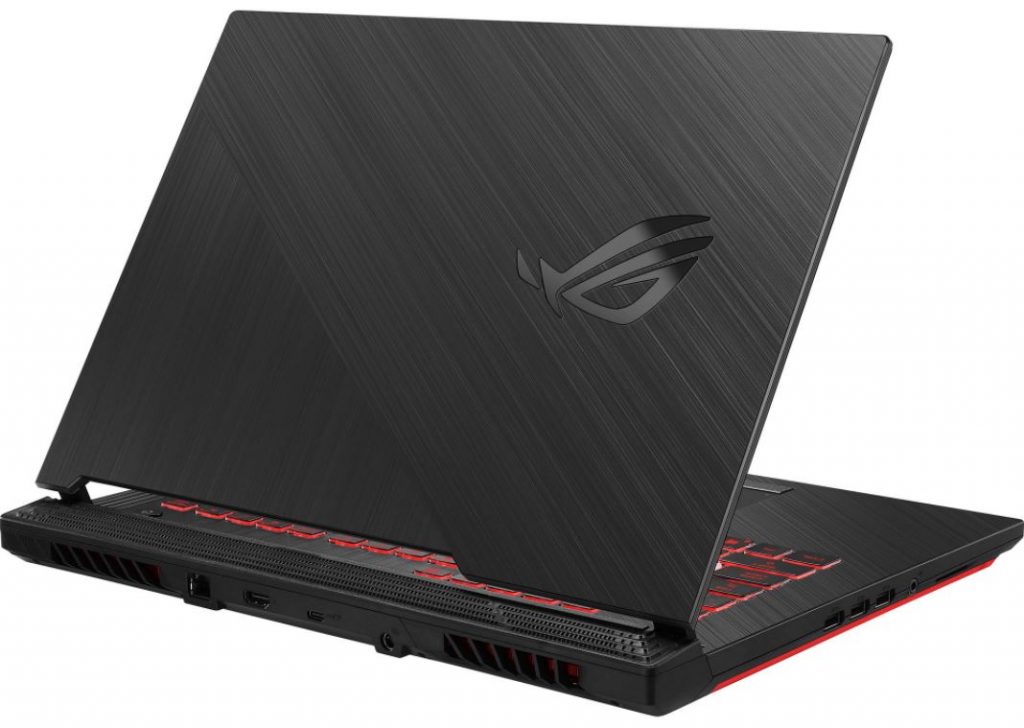 The interior also features a one-zone RGB-lit keyboard and pink WASD keys. The touchpad has a pink border around the interior. It goes without saying that if you’re not a fan of pink, you’re going to hate this laptop. The faux-aluminum deck is half painted in a super dull pink, and the other half has a bunch of ROG-marked paint in the same hue. It looks pretty smooth. Meanwhile, the edges on the screen are incredibly thin, but unfortunately, there is no webcam to be seen.

The Strix G15 has quite a few ports but can use a Mini DisplayPort. On the left, there are three USB Type-A ports and a headphone jack. Instead of the other ports on the right side, they are on the back of the laptop and contain a power connector, an HDMI port, and a USB Type-C port.

Typing on the keyboard of the Strix G15 was oh, so, satisfactory. The keys weren’t clicking, but they felt spicy because of the amount of operating force needed to press them, and they provided satisfying, thick feedback. The keys reacted well, and the palm rest was super comfortable, which is surprising because the keyboard didn’t dip into the chassis, but was close to the deck. The keyboard features one-zone RGB illumination controlled via the Aura Creator app, which allows you to choose between effects such as Breathing, Rainbow, or Strobing. 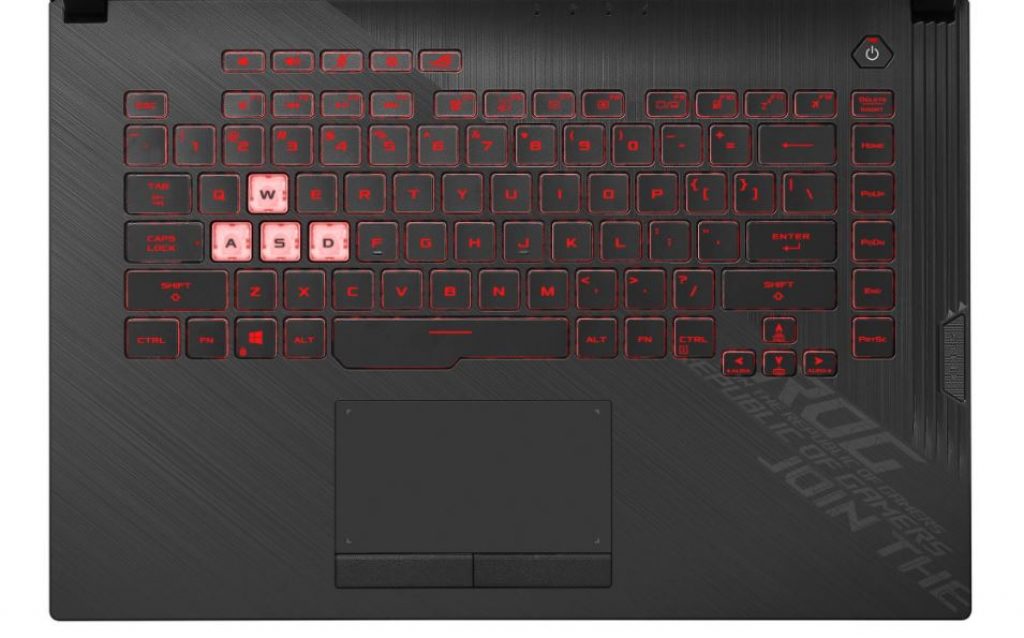 You can even adjust the effects to play at several intervals. There’s also a setting that allows you to sync the RGB lighting with music. As for the touchpad, it’s pretty soft, and the two discreet mouse buttons are responsive and have a decent click. Windows 10 gestures, such as two-finger scroll and three-finger tabs, worked well thanks to the Windows Precision drivers installed in the system.

Even for a $999 gaming laptop, the ROG Strix G15’s 15.6-inch, 1920 x 1080 pixel, 144Hz display is bleak and offers very little color coverage over a dim panel. In the trailer for Bill & Ted Face the Music, the blue and pink shirts worn by the titular characters have fallen flat on the Strix G15’s panel. Meanwhile, the lack of clarity left Brigette Lundy-Paine and Samara Weaving to mingle with the dimly lit set around them. 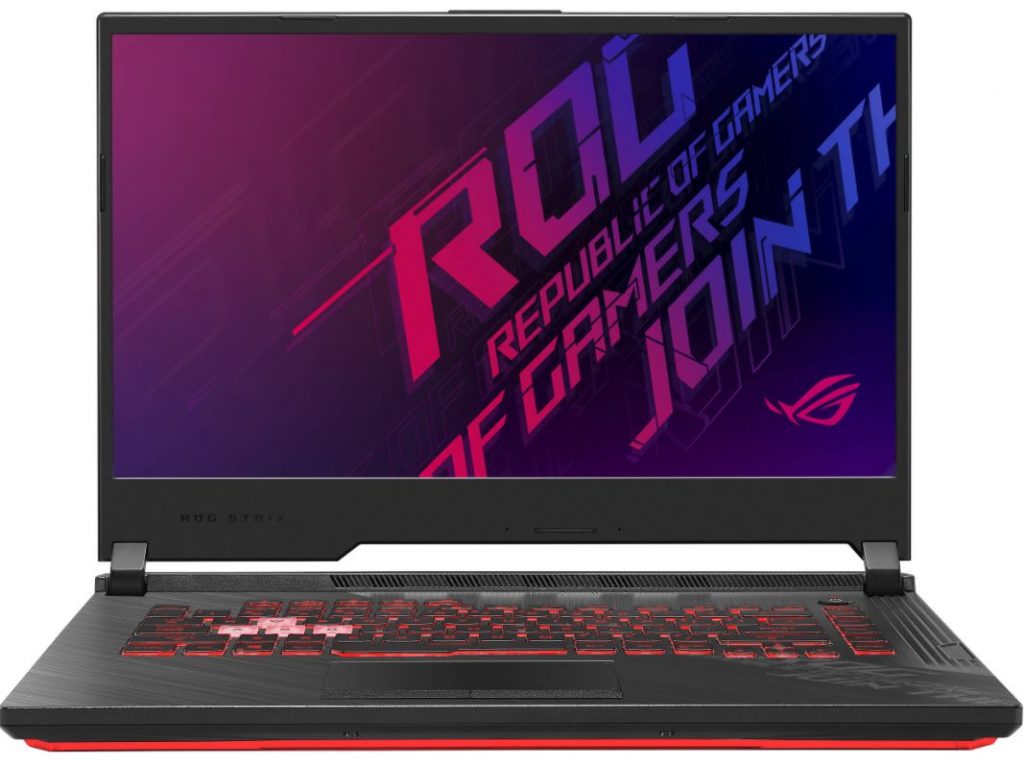 Even surrounded by nothing but green in Red Dead Redemption 2, the scenery failed to pop, as the red flowers were pale orange, and the grass looked like the water was urgently needed. When entering a saloon, half the place was dark because of the general darkness, and it was difficult to see any sharp detail around the bar.

The side-firing speakers of the Strix G15 sounded hollow and didn’t have enough bass to bring music and gaming close to good. In Mother Mother’s “It’s Alright,” the guitar was pleasantly clear, but when the vocals came in, they sounded hollow and noisy. Also, when the drums were introduced, they came off as saturated, not deep. All in all, this mix didn’t bode well for the chorus, where the instruments collided and created an unpleasant sound.

While playing the Red Dead Redemption 2, I noticed that the dialogue was sharp and not very bassy. When I pushed some old guy on the floor, it created a soft thump instead of a thick one. Despite that, the gunshots from the rifle were pleasant; however, with some extra bass, they would have sounded more satisfying.

There’s the Sonic Studio III audio app aboard the Strix G15, which offered options to adjust the clarity of voice, bass, treble, reverb, and surround sound. Still, when I tampered with all the settings, I noticed little or no difference in sound quality.

Packaged in the Strix G15 is the Nvidia GeForce GTX 1650 Ti GPU with 4GB VRAM, which averages a solid 30 frames per second in Red Dead Redemption 2 at Medium settings at 1080p as I walked around shooting fools in a glow of glory. But it would still fall below 30 fps, so I recommend lowering the settings to low. 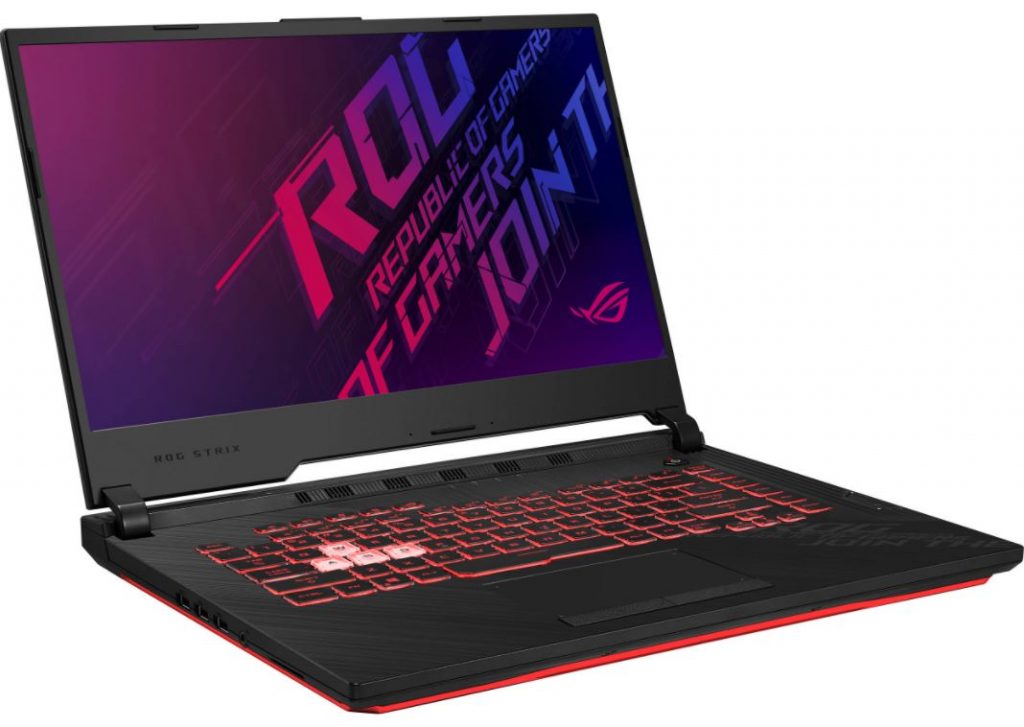 Under the hood of the Strix G15 is an Intel Core i7-10750H processor with 8GB RAM. Despite the cutbacks on RAM, the Strix G15 has juggled 40 Google Chrome tabs and five 1080p YouTube videos without much delay. However, I did notice some severe signs of lag when I tried to change the display color in the built-in ROG GameVisual app. 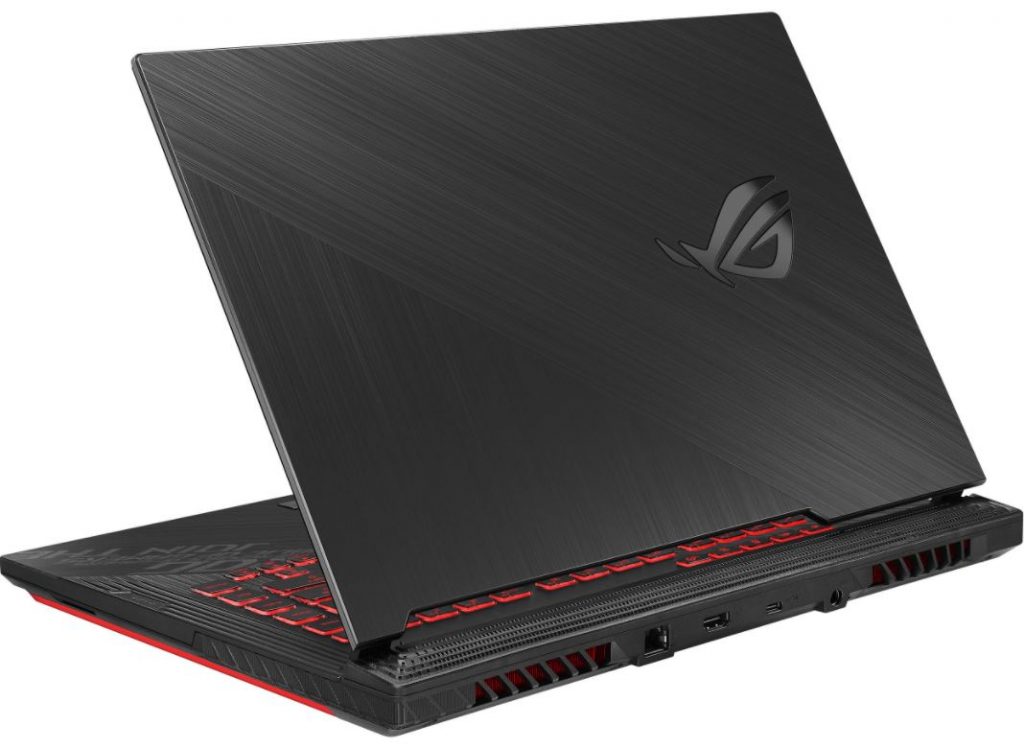 Gaming laptops have significantly increased their battery life, but the Strix G15 is slightly behind. After surfing the web continuously over Wi-Fi at 150 nits of brightness, the battery is down by 5 hours and 11 minutes, which is more than an hour shorter than the average 6:29 budget gaming laptop. While the HP Omen 15 (3:05) did worse, the Dell G5 15 (7:14) and ROG Zephyrus G14 (11:32) excelled in battery life.

The Strix G15 gets a little warm under the hood, but not warm enough to be uncomfortable. After streaming a 15 minute, 1080p YouTube video, the underside measures 105 degrees Fahrenheit, which is above our 95 degrees comfort threshold. The center of the keyboard and touchpad hit 91 degrees and 77 degrees, respectively. The machine got the hottest temperature in the lower right corner of the bottom and hit 117 degrees. 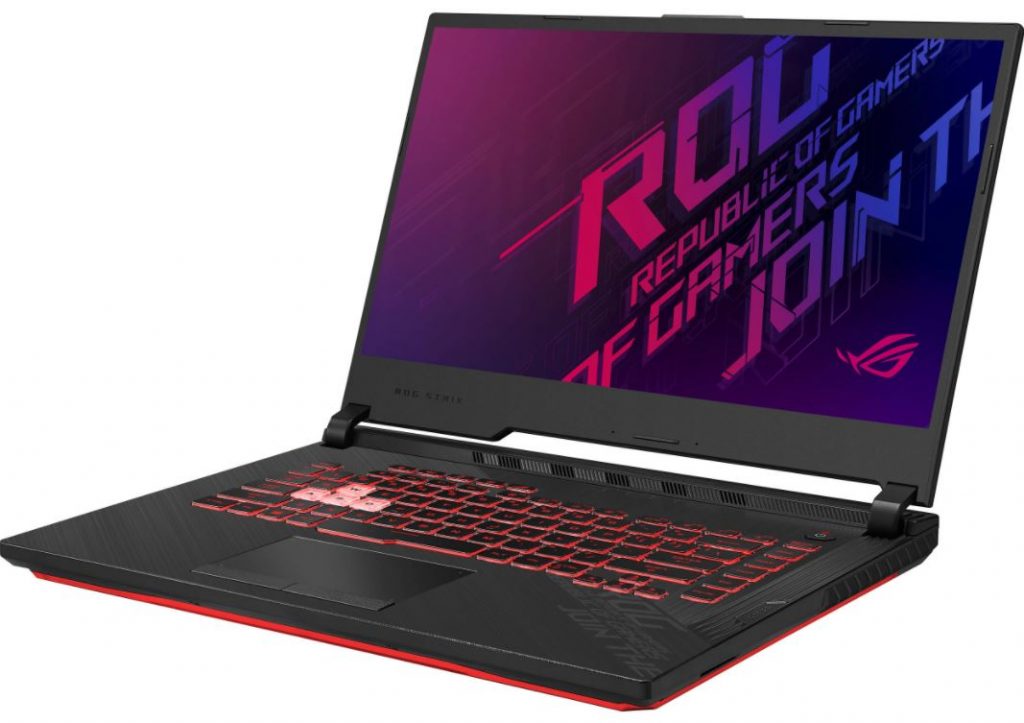 Overall, the Asus ROG Strix G15 is a reliable gaming laptop. It features strong performance, a comfy keyboard, and beautiful design, but the battery life is subtle, while the speakers and display are awful. If you throw in an extra $200, you can pick up the Dell G5 15 SE (2020), which offers more reliable performance, longer battery life, and a much better display. But if you can’t afford to spend a little extra and are willing to look past a dull screen and average speakers, the Strix G15 will serve you well enough.

The Asus ROG Strix G15 has a slim body and a snappy keyboard, but hollow audio and dull display downs it heavily.