Windscribe is a popular VPN service with a great free plan, useful advanced features, and servers in 62 countries. No matter how you connect to the internet, you will be covered because Windscribe has apps for Windows, Linux, macOS, Android, iOS, browser extensions for Chrome and Firefox, and the ability to set up a VPN on routers, TVs, and other OpenVPN compatible devices. In this Windscribe VPN review, we look at its features, pricing, and performance to see how it compares to other VPNs on the market today.

The list of features of Windscribe is quite long. In addition to the standard VPN service, Windscribe includes a free malware-blocking browser extension that blocks malicious websites, trackers, advertisements, and widgets that block your browsing experience. R.O.B.E.R.T’, as the extension is called, is surprisingly advanced and allows you to falsify your GPS location, block WebRTC leaks and whitelists, and change your browser user agent to make it harder to track you.

The apps use multiple techniques to keep your connection private, such as powerful AES-256 encryption, DNS traffic redirection, and IPv6 traffic reduction. We also liked the kill switch feature that immediately blocks Internet access if the VPN connection fails for any reason, keeping your browsing private at all times.

However, you may have noticed that we did not praise or penalize Windscribe on its server in this review. This is because Windscribe does not disclose the exact server numbers to users. Numbers are flying around on the web, but nothing we would consider concrete enough to mention as a fact in this review. However, in our use, we had no problem finding decent connections at the locations we selected, so even if the service is not in quantity, the servers it has been doing a fine job.

Windscribe’s privacy features begin with industrial AES-256 encryption, with SHA512 authentication, a 4096-bit RSA key, and support for perfect forward confidentiality (keys are not reused, so even if a snooper comes into possession of a private key, he will only be able to view data within a single session).

The apps use multiple techniques to reduce the risk of data breaches, limit IPv6 traffic, forward DNS requests to the VPN server, and optionally use a firewall to block all Internet access if the connection is lost. We checked the performance of Windscribe on a Windows 10 system using the websites IPLeak, DNSLeakTest, and DoILeak and found no DNS or other leaks.

We enabled the Windows client’s kill switch (which Windscribe calls a firewall) and forcibly closed the VPN connection to see how it would behave. The result was almost perfect:

We would have liked a desktop notification to tell us when the connection was disconnected, but that’s just a usability issue; if the firewall is activated and the client is minimized, it’s left to the user to guess why his/her internet access died. Usually, however, you should be reconnected within seconds, so this is not a significant problem. And as far as privacy is concerned, the client worked perfectly. It can handle any strange situation we encounter and protect our traffic at all times.

Windscribe’s logging policy is laid down in a clearly written and refreshingly short privacy policy that explains what the company does and does not collect. There’s a small amount of long-term logging. Still, it’s limited to the total bandwidth you’ve used in a month (essential for managing usage on the free plan) and a timestamp of your last activity on the service to identify inactive accounts.

The system briefly collects some connection data – username, VPN server connected to, time of connection, bandwidth used during the session, number of connected devices – but these are only stored in the VPN server’s RAM and are lost when the session is closed.

Furthermore, there is no logging of connections, IPs, timestamps, or browsing history. As the privacy policy states, ‘we do not store any logs of who used which IP address, so we cannot link user activity to a single user.’

Since there is no record of your activity, Windscribe points out that there is nothing to share. This is supported by a transparency report which shows the number of DMCA and law enforcement requests made during the year, and in both cases, this is stated: “Exactly zero requests were granted due to lack of relevant data.”

This is all well and good, but we would like to see Windscribe go further. Competitors such as TunnelBear and VyprVPN have had their systems publicly audited for logging or other privacy issues, and that gives much more security to potential customers than reassuring words on a website. We hope Windscribe (and other VPN providers, by the way) will do the same soon.

In the meantime, it’s worth remembering that Windscribe gives you 2 GB of data per month for free, without the need for an email address or other personal information. The data limit will be a problem for streaming users and heavy downloaders. Still, if you’re looking for email protection and basic browsing, you’ll automatically get more guaranteed anonymity than you have with almost anyone.

Our performance tests started with a connection to the nearest servers of a British data center and a U.S. location with a 600Mbps test line, and then we measured the download speeds using the benchmark sites TestMy.net and SpeedTest. 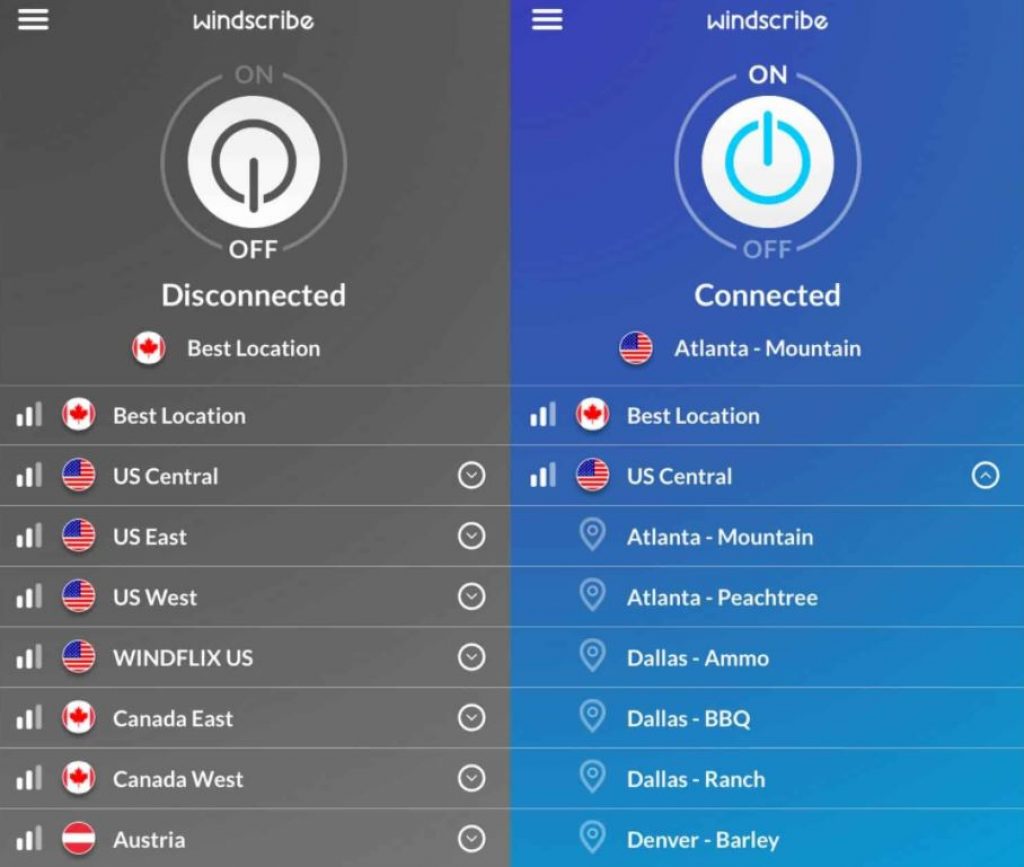 Results in the UK were good, with downloads averaging 220-260Mbps. That tramples Surfshark (a 150Mbps peak in our last test) and CyberGhost (180Mbps at best) everywhere and compares well with many others, but can’t match NordVPN‘s latest results (310-380Mbps).

American speeds were relatively disappointing at 60-80Mbps. We ran our tests twice and saw little change, but when we were connected to the USA from the UK, speeds jumped up to an average of 210Mbps. It’s not clear why there was such a significant improvement in connecting over a greater distance. Still, even if we take the worst-case scenario for Windscribe – our US-based test environment connected to an overloaded server – there’s a chance you could get much better speeds by changing locations.

Also, keep in mind that these tests used OpenVPN connections. WireGuard is already available on mobile apps, and Windscribe says it will soon be available on the desktop, so you may see much better speeds than we have achieved.

You don’t have to take our word for it or buy a one-month account to view it. The free plan gives you up to 10GB per month, with access to numerous locations and full speed servers. If performance is your top priority, it gives you enough time to try the service before you buy and see how it works for you.

By connecting to a VPN server in another country, you can theoretically access content that you wouldn’t be able to see (e.g., viewing US-only YouTube clips). Unfortunately, it’s not always easy, as many content providers now try to detect and block visitors they think are using a VPN.

To test a VPN’s unblocking, we log in to various American and British locations and view American YouTube, American Netflix, and BBC iPlayer streams. YouTube is usually the easiest to access because it seems to do little or no VPN checks. Sure enough, Windscribe allowed us to view only American content without any problems, even with his free plan.

BBC iPlayer has a more in-depth connection control, and we’ve seen that Windscribe has some issues with it in previous reviews. But not this time: iPlayer didn’t detect our VPN usage, and we were able to browse and see what content we wanted.

By switching to Amazon Prime Video, we had no problems viewing content from US Amazon.com using our UK Amazon account. Netflix is usually the most challenging site to unblock, but not here: Windscribe brought us to US Netflix from all our test sites (three per country).

That’s not all. Unlike many competitors, Windscribe also has virtual servers to access Netflix in the UK, Japan, and Canada, and they worked perfectly for us. The good news continued when Windscribe also let us view Disney+, giving it a perfect 100% score in our unblocking tests.

Windscribe has a free plan, a fully paid plan, and a build-your-own plan where you can only pay for the locations you need. You can pay extra for a static IP that improves bypassing the location blocking, and there is a ScribeForce group membership option for five or more teams.

The free plan includes 2Gb of data transfer per month, increasing to a healthy 10Gb when you register your email address. However, you are limited to a paltry ten servers in America, Europe, and Hong Kong unless you shell out.

Upgrading to a paid plan gives you access to all server locations and an unlimited data transfer limit. If you go monthly, it will cost you $9 a month – already cheaper than most premium VPNs – and if you pay annually, the price drops to the equivalent of $4.08. While this isn’t the most affordable VPN we’ve ever seen – Surfshark bottoms out at less than $2 a month – Windscribe still offers decent value for money.

The Build A Plan option can save you money if you only need to connect through a few locations. It is priced at $1 per location with 10GB of data each, but you need to include at least two locations. You can also choose unlimited data for an additional $1 per month.

If you’re a casual user on a budget, you can use the free plan for most of the year and pay $3 for a month of unlimited data if and when you need it – maybe if you’re going on vacation or a business trip and want a streaming VPN.

Yet another option is ScribeForce, a group plan designed for businesses or families. It costs $3 per month per user, gives everyone access to the full unlimited service, and has a minimum of five people.

Windscribe’s support is a mixed bag. The site contains a massive list of guides for setting up the VPN on devices from desktops and cell phones to routers and smart TVs, but they rarely go into depth. The browser extension support is even worse, with just a few 2016 YouTube videos to guide you.

24/7 people support is not available, and there is no live chat or email support. The website has a contact form where you can create tickets, but as a Windscribe blog post, the company only complains to 13 employees and performs all the support in-house. Windscribe has millions of users, so this minimalist approach to technical support might see you waiting for a response for a while.

However, for common problems, Windscribe has developed the ‘Garry Bot,’ which will be your first port of call if you have any issues. It is located at the bottom right of the website and will answer your questions with pre-written answers. This is fine for some things, but it is not nearly as extensive as many of Windscribe’s rivals, who have dedicated support operators working 24 hours a day, seven days a week.

After completing our Windscribe review, it is relatively easy for us to recommend this VPN, thanks to the well-paid plans, comprehensive privacy-protection tools, and the app’s simple, modern design. The free plan provides you as much as 10GB to play every month, and there’s plenty of choice in the customizable paid plans. However, there are cheaper options available, and the support team can give you a reason to go elsewhere as after-sales care is a deal-breaker.

Windscribe does not have the best or fastest support, but that will not be a problem for everyone. Usually, it's a great VPN, and a generous free plan makes it easy to try the service yourself.

5 Best Software For Making Music of 2022